Fic Title: On the Wind to a New Day
Fandom/Verse: Dark Angel
Pairing: Alec/Logan, past Logan/Max
Rating: R
Warnings: mild violence, language, m/m slash
Word Count: ~13,700
Summary: After the revolution, Alec must re-do his life: new apartment, two jobs, a lot of reconstruction, and a young man discovering himself. But there’s one thing Alec wishes he could go back to, one thing that gives his life meaning and purpose. If only he can convince Max and Logan to see it his way.
Author Notes: Written for

evian_fork. All artwork featured here belongs to her. Lyrics in italics are credited to the magnificent genius of Pink Floyd, either as a band, or separately as Richard Wright, Roget Walters and/or David Gilmour. 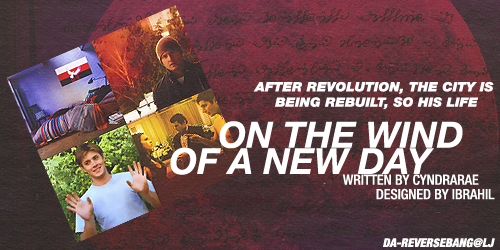